In my last post I described how to deploy web applications to a build integration server using Team Foundation Server 2010. The next logical step once the build is successfully deploying to the integration server is to trigger a set of integration tests to verify the deployment. In this post I will describe the changes to the Default Template build workflow to execute Integration Tests separately from the existing Unit Tests.

It is important to consider at this stage why we would run integration unit tests, as opposed to the unit tests executed as part of the assembly build process.

Unit tests executed as part of the build are intended to verify the individual components are functioning correctly, and often would use mocked interfaces to ensure that only the specific functions being tested are executed. Unit tests are typically not reliant on deployed components and therefore can be run as soon as the assemblies have been built.

Integration tests on the other hand are intended to run against the fully deployed environment to ensure that the individual components successfully execute together. Integration tests therefore need to be executed after the application components have been deployed to an integration server. Failures in integration testing might indicate breaking changes such as database changes, missing data, or changed interfaces into other components of the system.

The integration tests have to run within the context of a build agent, to the activity needs to take place at the end of the Run On Agent activity, directly after the packages have been deployed to the build integration server within the Deploy Packages activity.

Because we are going to borrow heavily from the existing “Run Tests” activity, but the execution will be outside the “Try Compile, Test, and Associate Changesets and Work Items” activity, we need to modify the scoping of the following variables. This is easiest done by editing the xaml directly in your favourite xml editor.

The parameters being added are as follows:

The default value for the Integration Test Specs argument provides the defaults for filtering the unit tests to only the integration tests. Ideally I would have liked to be able to filter this to *test*.dll with a test category of Integration, however based on some rudimentary experimentation it appears that the Test Assembly Spec constructor can only set the assembly name filter. In the end I’ve used the following TestSpecList definition as the default value:

Configuring the filters for your integration tests is a matter for personal preference, though I’ve found the following approaches fairly simple; 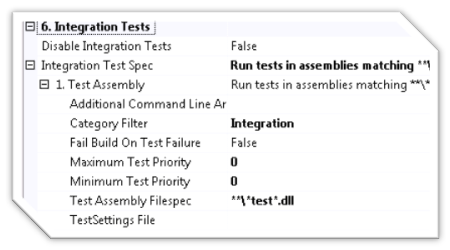 Having the integration tests successfully executed is all fine and good however you will find that it is necessary to configure the endpoints in the app.config file of your unit tests project to always point to the integration server, which causes some inconvenience if you wish to run the same tests locally on a development environment.

I'm a consulting solution architect specialising in the application and integration architecture - though my (very occasional) posts here are generally more related to a specific technology that has grabbed my interest at the time.