In my last post several months ago I described some of the work we’ve been doing to automate web package deployment using MSDeploy and Team Foundation Server 2010 Build Server. In that post I introduced a number of “hard coded” customisations to the Default Template workflow script that is used to drive the TFS Build.

Recently I’ve been refining this script further to allow the reuse of the unmodified workflow scripts between projects through the use of XAML arguments, and thought I might share the output.

This post will focus on modifications to the standard workflow template to allow for an MS Deploy activity to be invoked based purely on the build definition, rather than customising the workflow for each team project.

Therefore I have used the very limited approach of defining a single set of deployment arguments, as opposed to a nice and tidy collection of strongly typed objects we could loop though.

The parameters being added are as follows: 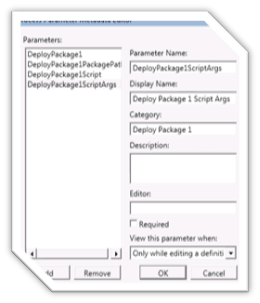 Step 2: Setup the metadata to group the deployment arguments

By default, all the added arguments will be added to the “Misc” category in the Build Definition Editor. Once you’ve added more than a couple of customizations this becomes fairly confusing so it is important to setup the metadata as you go.

Step 3: Modify the Invoke Process activity to use the arguments

For this demonstration I’ve chosen to trigger the deployment immediately after the “Try Compile, Test and Associate Changesets and Work Items block”. This is convenient, since it is directly after the output directories are populated – though I am not yet sure that this step will stay here once the integration tests are plugged in.

The parameterized activity results in the following xaml being produced.

You’ll note that I’ve wrapped the old Invoke Process activity in a new If block – the primary purpose of this is to allow us to use this workflow even for projects that do not use the build features.

The final step is to setup the build definition. 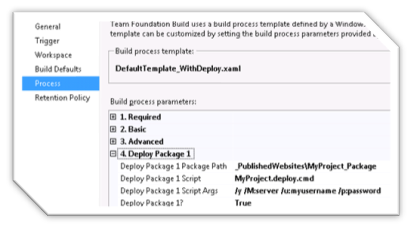 Step 5: Trigger a build, and watch it work!

There are a number of changes that we have introduced to the standard workflow, that I will endeavour to describe in my next few posts;

I'm a consulting solution architect specialising in the application and integration architecture - though my (very occasional) posts here are generally more related to a specific technology that has grabbed my interest at the time.